Many people don’t know that it is possible to add hair density with Scalp Micropigmentation aka hair tattoo. My client’s hair was still quite thin after having his hair transplant and he couldn’t afford another expensive procedure. He decided that SMP is his best and most affordable option. Keep reading A.K’ s story below.

During A.K’s third session I’ve asked him about his hair loss journey and his experience at ScalpMates with the cosmetic treatment. I hope his insight will be useful to someone out there.

First I tried laser therapy and it didn’t really work and it was quite expensive as well. That was something like once a week or twice a week for 6 months but it was too much of a commitment. Because I’d have to travel to Birmingham, sometimes after work I couldn’t make it and if you don’t do all the sessions properly, it doesn’t work properly. Then I tried once more to stick to it but even then I wasn’t really doing it as well as I should, with the oils and stuff (for the aftercare). So that wasn’t really for me.

Then I tried the transplant after but that can only cover so much..

I was researching it for maybe few weeks, then I typed it into Instagram and this is one of the first places I found. I was more interested in Scalpmates becasue I noticed a lot more density work rather than only full shaved look SMP.  The other places didn’t really share too much of what I needed, which was to make my hair look thicker. That’s when I contacted you and we booked it for like the next week

I’d say that not a lot of people know about it, but it’s getting there. Especially that a lot of women use a similar treatment for eyebrows (Microblading)

Yes, to me it was just a tattoo on top of the head, but I did do my own little research and realized that it is not exactly like a body tattoo. It goes lighter and doesn’t hurt as much apparently, which was nice to know.

Yes, even when I came to you guys, all I did was fill up a form, you got to look at my hair and we got started straight away. I like that there is no time wasting, we just did it.

I didn’t expect full coverage of my hair, like a full black head of hair. I just thought that whatever I can get done here with a natural look, I’ll be happy with.

For me, having naturally looking results was more important than a very dramatic difference. But after the first session I was hooked and I wanted to go darker and darker and luckily it still looks natural.

To be fair I was kinda anxious for about an hour or so into the treatment. Then I asked you to have a look at the back of my head and I was so happy with the result and I was able to relax after.

And front of the head is about 3.5

It’s not very painful compared to the transplant. But even if it is painful for you, it’s only a few hours then you’ve got better hair for the rest of your life. I took a Paracetamol today to help a little bit with the discomfort.

It feels differently throughout the head. In some places I feel like a tickle, some of it feels like an itch and that feels nice. Very rarely it hurts a lot, but most of the time it’s fine.

Well, most of the time we were just chatting, which made the time go fast. You also have Netflix here, so can watch that as well, have my phone. It doesn’t really feel that long,

To be fair I had no redness whatsoever. I’ve done my research and some people’s scalp gets quite red which is normal, but I didn’t notice any of that with me.

No, not at all. Even straight after you leave the chair you can’t feel any pain at all. In the beginning it was just like an itch sometimes If I’m being picky. And maybe If you touch your scalp in the first couple of days you could tell that that you had a tattoo on your head.  I wouldn’t even count that as sore though.

It was pretty simple, but I tend to forget. But if I forgot then I’d just drop you a message and you replied within 10 minutes. I remember one question was about the shampoo that I can use. You said that I can use shampoo after 3 days just to be gentle with it.

Did you understand the healing process? Why it looked like it faded so much?

The first session it faded a lot more that I thought it would, but I could still see the remnants of it. But second session was like triple the first session. For me it was a big difference and I was really happy with the way it looked then.

I did my own research before and you told me as well that some of the pigment from the surface of the hair will wash off when I shower first time, so I wasn’t worried.

Yes, definitely looks natural. No one close to me even noticed the SMP, even though there was a big difference in my hair density.  I did get a few compliments on my hair since then.

Definitely, and the fact that I could pay in installments definitely helped. 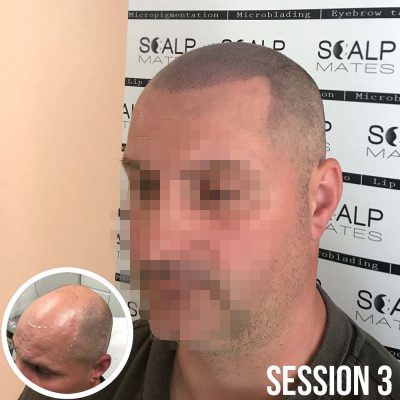 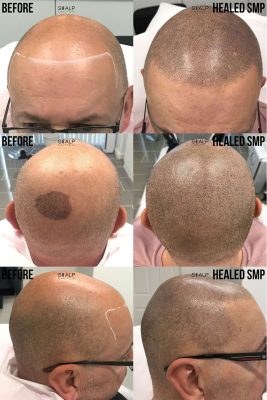 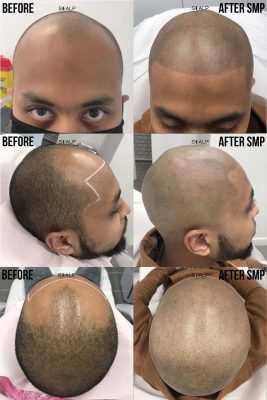 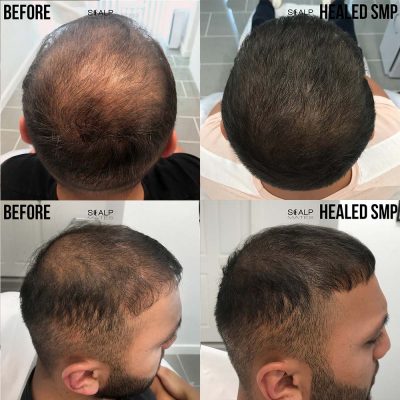